Box of Rocks Finest on Television

The Dawn of the Couch Potato

In spring of 1974 did you skip school to watch Kiss on The Mike Douglas show? I did, and I know that others around my age did likewise. My mom found out, called me a “truant hippie”, made me do extra chores. It was worth it. 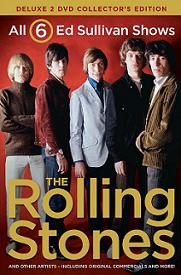 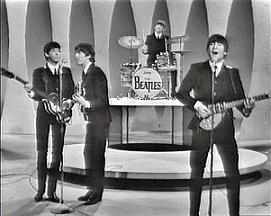 The Beatles on Ed Sullivan!

American television contributed to the growth of rock and roll in the form of music variety shows such as the Ed Sullivan Show, which featured appearances by Elvis Presley, The Rolling Stones, The Beatles, Beach Boys, Jackson 5, The Mamas & the Papas, Janis Joplin, Lovin’ Spoonful, Doors, and The Band.

The Dorsey Brothers Stage Show, which appeared on CBS affiliates, was hosted by big band leaders and brothers Tommy and Jimmy Dorsey. The program was a Jackie Gleason project, and, for trivia buffs, it debuted the first national television appearances of Elvis Presley. Presley first appeared on January 28, 1956, and he made five more appearances during the next eight weeks. Presley first visited the Sullivan show in September of the same year.

When rock music began appearing in television broadcasts, it was the latest wrinkle in a long history of conflicts between musicians, television networks and producers, labor unions, record labels, and other similar interests. All parties wanted a bigger piece of the pie, or some wanted the entire pie for themselves. Eventually compromises were reached, and today we can buy videos of all types of television shows, although they may not always be the ones we really want. We’ve located a bit of variety for you to screen.

Get The Point today!

Something for everyone, not just the kids, The Point is an animated film with a story straight from the uber-talented mind of Harry Nillson. The movie was initially released in 1971, and Nillson provided the soundtrack for the project. A single, “Me and My Arrow”, was featured in the production and achieved minor hit status for Nillson. The film portrays a father as he tells his son a bedtime story about young Oblio, who believes that having no point in the fantastical kingdom of pointed heads and things will not allow him to ever fit in, and therefore he has a point.

In January of 2005  on the Internet Movie Database, Joe from Maine commented:

“Harry Nillson wrote an incredible story, that comes along with excellent, singable songs that will live through the ages. The story is touching and the characters are wild.

Harry Nilsson had this to say about the origins of The Point:

We’ll rewind to another ‘blast from the past’ and shine some light on the Midnight Special, which NBC aired as a 90-minute pilot in the middle of August in 1972, to encourage young people to vote. In early February the following year it premiered as a weekly series, with different hosts every week, aside from a nine-month hosting stint by singer and outspoken feminism advocate Helen Reddy. Wolfman Jack was the series’ announcer and a frequent guest host.

The series had a huge following in America, a Friday Night Rite as it were, and sustained itself for nearly a decade. At the frenzied, Studio 54 days of the Disco craze, the set was modified to resemble a discotheque, adorned with a platform dance floor, the Wolfman spinning the hits. It was shiny and glitzy and soon abandoned in somewhat short order.

During the waning viewership in the final years of the series, producers were targets for criticism regarding their lack of attention to the growing fanbase of punk and new wave music of the day. With some occasional punk or new wave acts appearing, most of the guests were Top 40 or disco acts. In early 1980, ABC’s Fridays, a comedy series, began featuring musical guests that were often more cutting edge than those seen on the NBC show. The writing was on the wall. In May 1981, NBC replaced the show with a previously a syndicated 30-minute series from SCTV (“Network 90”), and the show was never revived.

In October of 1952 American Bandstand began as a local Philadelphia show called Bandstand, which made its debut on WFIL-TV Channel 6. The series was renamed American Bandstand on August 5, 1957, when ABC began broadcasting it nationwide. In 1964, production of the show was transferred from Philadelphia to Los Angeles. American Bandstand’s fans remained loyal to the series, as it continued to present the latest music and dances. It even inspired another long-running dance show, Soul Train.

In September of 1987 American Bandstand’s long association with ABC finally ended. Two weeks later the series once again aired, this time in first-run syndication. In 1989, the program moved to the USA cable network. This version stuck around for just six months, with the final show airing on October 7, 1989. In 1995, the cable network VH-1 began broadcasting vintage episodes of American Bandstand.

Don Kirshner was the executive producer when ABC’s In Concert series hit the airwaves with two shows in November and December 1972. The programs, taped at the Hofstra Playhouse at Hofstra University in Hempstead, N.Y., included live performances by Alice Cooper, Curtis Mayfield, Blood, Sweat & Tears, Poco, The Allman Brothers Band, The Steve Miller Band, and Joe Walsh. Their ratings doubled the average ratings of The Dick Cavett Show and even topped NBC’s The Tonight Show in some markets, especially among viewers under the age of 35.

The series became a hit, and In Concert began airing bi-weekly episodes in January 1973. In September 1973, Kirshner left In Concert to launch his own syndicated Don Kirshner’s Rock Concert. The premier in September of 1973 featured The Rolling Stones, taped in London, in their first American TV appearance in over four years.

Kiss Meets The Phantom Of The Park

The hype of KISS made it to the small screen in 1978 with Kiss Meets the Phantom of the Park. The made-for-TV movie recounts their efforts to sabotage a diabolical plan by mad scientist Abner Devereaux. Devereaux has created a method of transforming humans into robots, and his laboratory just happens to be located at an amusement park. The mastermind plans to use the KISS concert as a distraction while he unleashes his plan on the world, and the rock group must use their special powers in order to stop him. This campy movie certainly did not get ‘two thumbs up’ from Siskel and Ebert, and while it is basically a cartoon without animation, some fans of the band probably have at least one copy of the film in their collection.

Here’s a YouTube version of the Kiss appearance in 1974, broadcast while my classmates were studying Greek history. I would comment on the episode, but a more in-depth article covers the whole thing. If you were in the audience that day, drop us a line. We’d like to find out just how many fans missed school that morning. Stay tuned!